Control of growth factor signaling
Cell proliferation is stimulated by the action of growth factor receptors. Overexpression and mutations in these receptors are frequently involved in the development of cancer. In my research I focus on the negative feedback control of growth factor signaling. The model system I am interested in are the ErbB-receptors such as the receptor for the epidermal growth factor or EGFR. The most important negative feedback system for this receptor system is the receptor down regulation: upon activation, ErbB-Rs are internalized and transported to lysosomes where they are degraded. We study the regulatory mechanism of receptor internalization and trafficking in live cells using advanced light microscopical techniques.

Nanobodies
Important for studying the behavior of molecules in the live cells is the use of fluorescent markers such as fused fluorescent proteins or by labeling proteins using fluorescent antibodies. To reduce the effect of marker size we are using antibody fragments from the variable heavy chain of heavy-chain-only antibodies (VHH) from Llama glama, which are also called nanobodies. These are proteins of 15 kDa that can directly be conjugated to a fluorophore. Nanobodies or VHHs can be selected by phage display and can bind to any different protein or lipid.

We have selected nanobodies against the EGFR, Her2 and Her3, and other tumor targets such as IGF-1R and Met. These nanobodies have affinities for their target proteins in the low nanoMolar ranges and because of their small size they have excellent penetration into tissues. We are using the nanobodies in our cell imaging studies, as novel anti-cancer therapeutics, and with in vivo imaging of tumor tissue.

2. What factors are regulating vesicular transport of EGFR containing vesicles?
EGFRs are internalized via two different pathways: a clathrin-dependent and independent process. After internalization, coated- and non-coated vesicles are transported to the early endosome. To study the regulation of this transport step we are using Total Internal Reflection Fluorescence Microscopy or TIRF. We have found that the transport of EGFR containing intracellular vesicles is kinase dependent. In this project we focus on the signaling molecules that are regulating this process. 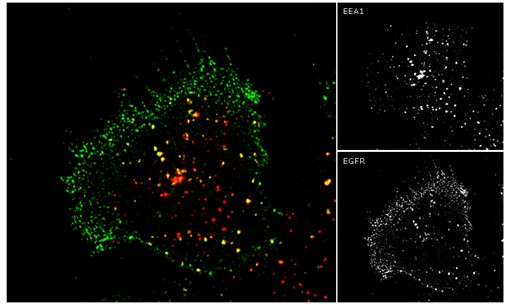 Internalization of EGF: EGF is labeled with Alexa488 and applied to EGFR expressing cells for 10 min. Cell are stained with anti-EEA1 for demarking early endosomes. Colocalization of EGF/EGFR complexes woth ealy endosomes is already seen which will further increase in time.

3. Nanobodies for tumor therapy
Selection by phage display allows for the generation of nanobodies that block ligand binding. We have selected a set of nanobodies against the EGFR that block binding of EGF (Roovers 2007). Epitope mapping shows that most of them are binding to domain III of the EGFR. Combination of two different anti-domain III nanobodies into one molecule (biparatopic nanobody)shows excellent blocking of ligand binding but poor effects on tumor growth (Roovers 2011). To optimize antitumor efficacy, we have made fusions of anti-EGFR nanobodies with sTRAIL, a ligand for the death receptor. Neural stem cells (NSC) were modified to express and secrete these fusion proteins. We have found that these variants of EGFR specific nanobodies released from NCSs specifically located to brain tumors induce a signficant reduction in tumor growth (Van de Water et al. 2012).

4. Nanobodies for in vivo imaging
Current technologies for targeted imaging of tumor tissue include immune-PET/SPECT and optical imaging. Antibodies are frequently used for the targetting of the different tracers to the tumor: radiotracers for PET and SPECT, and fluorescent dyes such as IRDye800CW for optical imaging. Optimal imaging, with high contrast, is obtained using probes that accumulate rapidly in the tumor while non-bound probes are rapidly cleared. The small size of the nanobody makes this an excellent probe for in vivo imaging; they accumulate within 2-4 hrs in the tumor while having in vivo half life of ~2 hrs.  We have used nanobodies against EGFR and Her2 to demonstrate their application in the imaging of xenografts in mice (Vosjan 2011; Oliveira 2012). 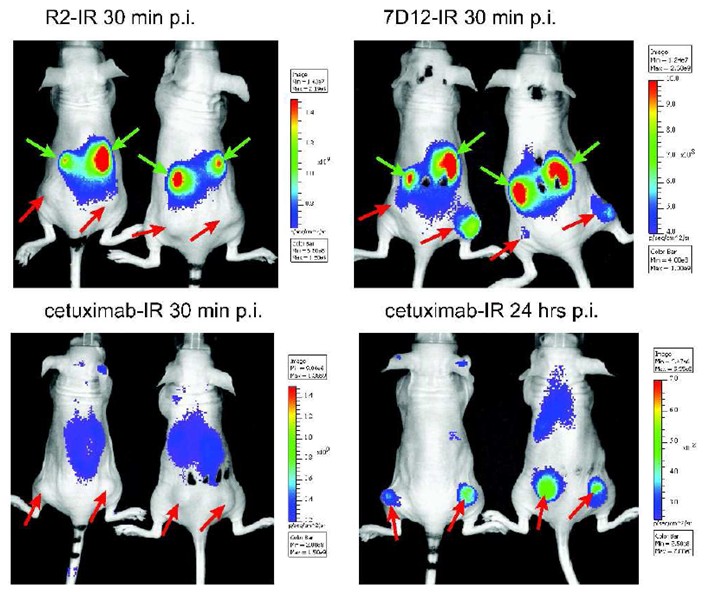 In vivo optical molecular imaging.  Athymic nude mice bearing A431 human tumor xenografts at both hind legs were intravenously injected with the anti-EGFR nanobody 7D12-IR, control nanobody R2-IR, or mouse monoclonal antibody against EGFR cetuximab-IR, and imaged under anesthesia at several time points post injection. A, Images of mice were taken with the optical imaging system at 30 min and 24 hours post injection (p.i.), in which tumors are indicated with red arrows and kidneys with green arrows.