Zeiss company was founded by Carl Zeiss in Jena (Germany) in 1846. In 1866 physicist Ernst Abbe joined Zeiss and designed greatly improved lenses for the microscopes they were producing. Carl Zeiss together with Otto Schott and Ernst Abbe … Read more

The Wild Heerbrugg company was founded in 1921 in Switzerland by Heinrich Wild. Heinrich Wild (1877–1951) was a leading designer of geodetic and astronomical instruments. In 1908, having invented a military rangefinder and after convincing Zeiss to manufacture … Read more

The Reichert company was founded by Carl Reichert in 1876 in Vienna. Carl Reichert was a son in law of Ernst Leitz. He learned microscopy business from Leitz in Wetzlar (Germany) and then moved to Vienna to establish his … Read more

Olympus was established in 1919 by Mr. Takeshi Yamashita in Tokyo, Japan. From the very beginning, the company specialized in microscopes. The first corporate name was “Takachiho Seisakusho“. In Japanese mythology, it is said that eight million gods and … Read more

The history of Leitz (now Leica) has started in 1849, when the 23-year-old German mathematician Carl Kellner (1826-1855) established the “Optical Institute” in Wetzlar for the development of lenses and microscopes. Kellner had invented a new achromatic combination of … Read more

Founded in 1892, Beck Kassel CBS (Christoph Beck and Sons) were a family business based in Kassel, Germany, engaged in the production of optical instruments, primarily binoculars. Following wartime destruction of their premises in 1944, the company … Read more 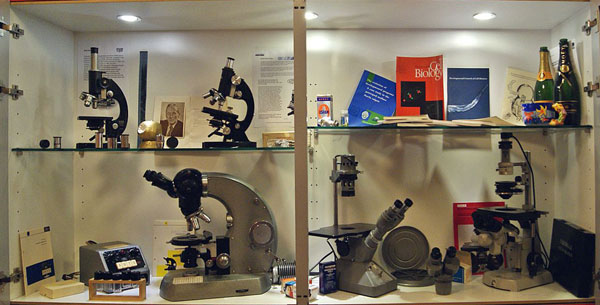 It is difficult to say who has invented the first optical microscope. Lenses have been used to magnify images of small objects for many centuries, and the oldest known lens is 3000 years old. There are several different implementations of … Read more