Microtubule-targeting agents (MTAs) are widely used for treatment of cancer and other diseases, and a detailed understanding of the mechanism of their action is important for the development of improved microtubule-directed therapies. Although there is a large body of data on the interactions of different MTAs with purified tubulin and microtubules, much less is known about how the effects of MTAs are modulated by microtubule-associated proteins. Among the regulatory factors with a potential to have a strong impact on MTA activity are the microtubule plus end-tracking proteins, which control multiple aspects of microtubule dynamic instability. Here, we reconstituted microtubule dynamics in vitro to investigate the influence of end-binding proteins (EBs), the core components of the microtubule plus end-tracking protein machinery, on the effects that MTAs exert on microtubule plus-end growth. We found that EBs promote microtubule catastrophe induction in the presence of all MTAs tested. Analysis of microtubule growth times supported the view that catastrophes are microtubule age dependent. This analysis indicated that MTAs affect microtubule aging in multiple ways: destabilizing MTAs, such as colchicine and vinblastine, accelerate aging in an EB-dependent manner, whereas stabilizing MTAs, such as paclitaxel and peloruside A, induce not only catastrophes but also rescues and can reverse the aging process. 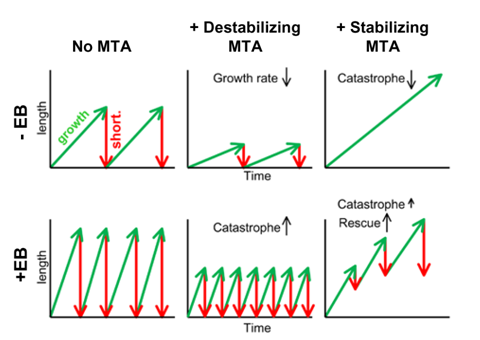